The way children and young people use social media is changing. Ofcom reported earlier this year that younger generations are posting less on popular platforms like YouTube and Instagram because they are dominated by superficial posts from influencers and celebrities. Children and young people want to engage with posts from their friends instead of ‘suggested posts’ or adverts for content they don’t care about. As social media begins to turn away from filters and ‘Instagrammable moments’, one app in particular has experienced a surge in popularity this past year.

Our online safety experts have looked at the photo sharing app BeReal to help parents, carers, and safeguarding professionals understand the attractions and risks this platform poses for those in their care.

BeReal is a social media app that asks users to take a quick snapshot of an ‘authentic moment’ during their day to share with their followers. This may not sound different from other social media platforms like Snapchat or Yubo, but the appeal of BeReal can be found in its name. It is formatted to make the user show their ‘real self’, something younger generations are eager to see in their digital lives. There are no filters or opportunities to stage the ‘perfect photo’ – what you see is what you get. BeReal describes itself as the “first uncontrollable media sharing platform.”

BeReal is free to download on any iOS and Android mobile phone. It was developed in France in 2020, but has risen in popularity this past year with a 315% increase in monthly active users. The app has been downloaded over 28 million times since its release, with the majority of downloads happening in 2022.

The minimum age to use BeReal is 13 – however, there are currently no effective age verification measures aside from requesting the user’s date of birth during sign up. “I like that it’s easy to use and random. It’s not like Instagram where you feel like you aren’t as good as other people or your life isn’t all together, when really, a lot of those posts are just fake. [BeReal] is more fun and it really does make you ‘be real’ because you can always tell if someone is posing or if they’re late to post or something. It shows me which of my friends can be themselves and which ones care more about what their posts look like.”

After a user signs up for an account (a process which takes less than a minute) they are instructed to make their first BeReal post via notification. They have two minutes to take a photo from the time the notification is sent. This is the pattern that is repeated once a day at the same randomly selected time for everyone. That may seem rather inconvenient, but this is precisely the idea. The random two-minute window doesn’t give users enough time to plan or pose for their photo. They have to post whatever they are doing at that exact moment. BeReal also uses both front and back cameras whenever a user is posting as well as the location. If a young person is sitting on the sofa with their pet, taking the bus to school, or even getting ready for bed, a notification from BeReal encourages them to ‘be real’ with what they are doing.

This is a standard the platform is not afraid to hold its users to. If someone misses the two-minute window and takes a picture later, their post is accompanied by a ‘late’ marker (with exactly how many hours late they are as well). If they take an unflattering photo, they can retake it, but BeReal will show their friends just how many times the photo was retaken (if they have more than 10 friends on the platform). If a person doesn’t want to post that day or wants to delete a post, they won’t be able to see their friends’ posts or posts on the discovery page from that day as a result.

Users can add friends from their contacts list on their phone or by searching their username. Once they add someone as a friend, this person can see (and is notified) whenever a BeReal is posted, which is especially noticeable if the person posts late. In response, users are able to leave comments, tag friends in comments, or use a ‘Realmoji’ – a selfie where they can visibly react to the photo instead of using an emoji. As for profiles, rather than a page that allows everyone to see past posts, BeReal only lets the user see their own ‘memories’ on the app.

On top of everything else, iOS users can add a BeReal widget (a bite-sized information display on a phone home screen that shows information without a user having to open the app) to their mobile home page, similar to popular app Locket. There is also a discovery feed (like TikTok) which allows users to engage with people from all over the world who are posting, but users must elect to have their posts visible here. Alongside alerts to post and when friends have posted, the app lets users know when someone takes a screenshot of their post. In order to see who took the screenshot, however, the app suggests users share their BeReal of the day on Instagram or via text messaging. 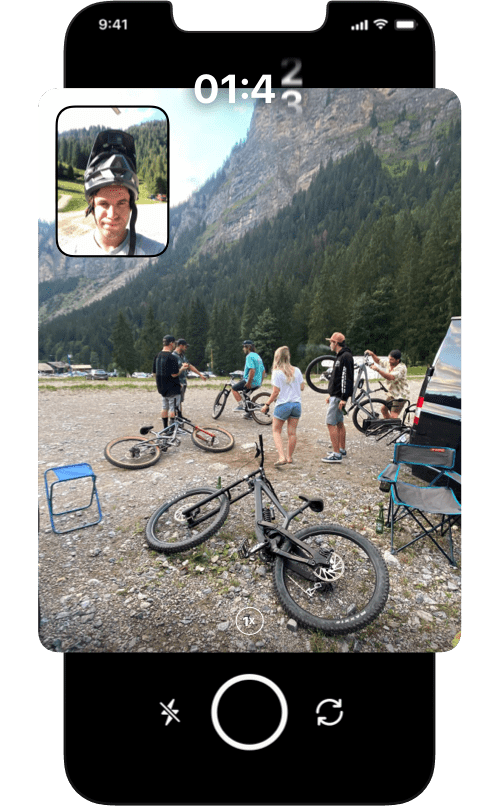 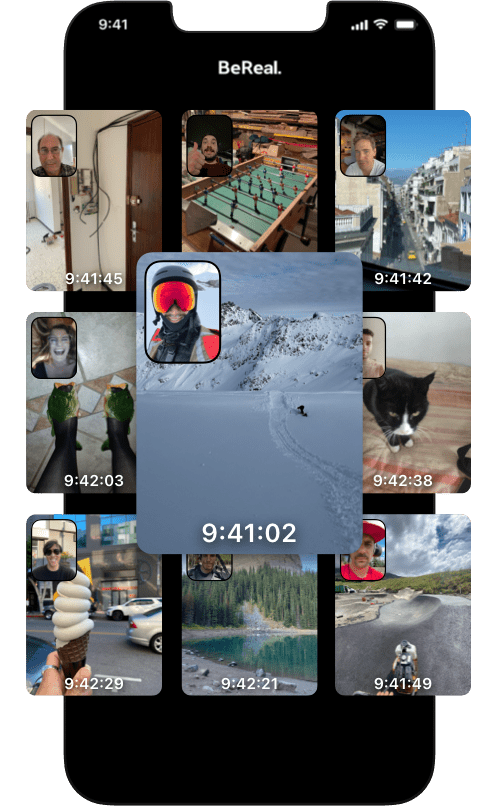 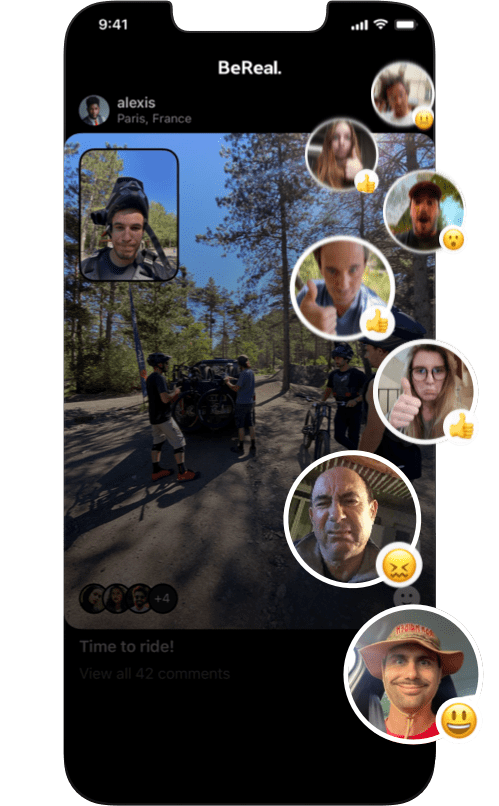 How is BeReal different from other apps?

“BeReal isn’t an app I would spend hours procrastinating on. I usually post my picture, briefly scroll through and react to my friends’ pictures, and then get on with the rest of my day. It has felt like a refreshing and healthy way to use social media that I’ve really come to appreciate… I plan to keep using BeReal for as long as it stays relevant.”

While this app is popular with young people and matches their desire to try and ‘curate authentic reality’ for others to see, it is not a perfect platform. Our online safety experts have highlighted several areas of concerns and risks that could be associated with BeReal, including its lack of parental controls and blocking within their safety settings. Users can report other users, but our testers were not able to validate the effectiveness of this function.

As with any social media, it’s important to note the potential of risk to young people – but it does not necessarily mean they are using the app in this way.

This app relies heavily on alerts, and a young person could become easily distracted by or reliant on waiting for the notification when they shouldn’t be on their phone (e.g. while in school or during family dinner).

The entire design of this app encourages young people to use the app when prompted. By using negative reinforcement if they don’t (limited viewing, labelling late posts) it persuades them to prioritise app use within their day.

A young person may begin to experience anxiety over what others will think of them if they are late to post, retake a photo, or miss the notification – generally, that they are not ‘being real’ and are instead ‘being fake’.

The limited posting window doesn’t account for possible time constrains (school/jobs/driving/events) where a young person may not be able to access their phone. This could encourage improper (and even illegal) phone use that could result in real consequences.

In an attempt to be as ‘real’ as possible and not seem ‘fake’, a young person may post inappropriate photos they would not otherwise share. This could cause further embarrassment and might even result in bullying by others.

Young people may begin to compare their posts with others. They may feel their lives are boring, especially if their friends seem to be doing more exciting things. This could result in frustration, sadness, or annoyance.

The two-minute posting window and alerts create a sense of urgency for users. This may result in a young person posting something personal or inappropriate that they would not otherwise share in order to achieve the app’s goal.

Every BeReal post could show the user’s live location and might also reveal personal details like schools, workplaces, and extracurriculars. It may even feature other people (who may be underage and/or unaware they are in a photo).

Once a user inputs a date of birth during registration, there is no age verification on the app. Their age is not mentioned on their profile, and they are not restricted from accessing any of the app’s features.

There are no privacy features, no parental controls, and no blocking abilities on this platform. It leaves a young person vulnerable to misuse or inappropriate behaviour, especially if they are unable to moderate their social media use.

The comments section on each post is open to all of a user’s in-app friends and could be used alongside tagging or ‘Realmojis’ (which feature a real expression) for bullying, exploitation, manipulation, peer abuse, and/or inappropriate behaviour.

Like many other platforms, BeReal uses a ‘discovery’ page that features posts from other users all over the world. This encourages interaction between complete strangers and could lead to communication on other apps with messaging functions (like Instagram or WhatsApp).

Top Tips for a Parent/Carer

If you’re a Safeguarding Professional, make sure to share this online safety article with staff, parents, and carers in your network to help keep everyone informed and relevant! 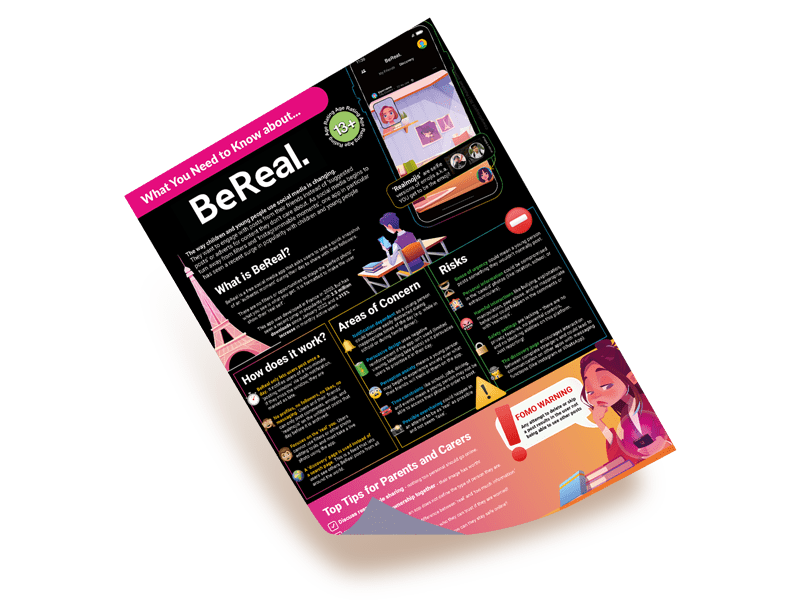